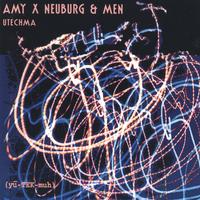 1995. Amy and her Men are finding their “sound” in this first release, and the result is enjoyably eclectic, with songs ranging from artsy to intimate to world-beat. The Men pipe in with quirky vocals and the occasional short improv.

This review in Musician Magazine sums it up nicely:

“Though little known outside of San Francisco, Neuburg makes music whose dizzy mix of complexity, accessibility, and intensity are matched by few. For frame of reference, begin with Frank Zappa: Neuburg shares his fondness for percussive ostinati (the multiple marimbas of “Delirium”), and a willingness to segue from polyrhythmic snarls to straight-ahead riffing. She can bait a tune on the kind of hook that sinks and settles: “Into That Hole,” with its synth peeps and drones, waterfalling guitars, and hypnotic whispered vocals, is a Cocteau Twins flashback, while the album’s opening cut, “Chinatown,” is a 9/8 tangle, with rhythms twining and loosening around dissonant guitars that blare like car horns in a traffic jam. On the title track, Amy rocks the rafters with a weird mix of Celtic pipe music, Nigerian pop, and film noir. Laurie Anderson would be proud…

“All this may seem a little pretentious, but Neuburg pulls it off with virtuosic aplomb. The Men ace her arrangements with humor and discipline, while Amy darts from synth to drums and lays down vocals which betray a theatrical sensibility. Now and then the band erupts in spasmodic improvisations called “Man Jams,” which seem to function as catharses for those who find Neuburg’s charts too confining. But the music works best when she holds the reins and challenges the listener to hang on.” [Robert L. Doerschuk]

“Wow! That was the one simple word that best described the one-woman musical hurricane that was Amy X Neuburg last night. If diversity, creativity, and flat-out ability were all crimes, Neuburg would have been locked up years ago.”

— Otago Daily Times, New Zealand
.
Utechma in the press
.
Addicted to Noise: "A multi-course feast with an intriguing blend of electronic, vaudeville, avant-garde, punk, world beat, pop, and marching band… Touching, humorous, sad, and enlightening... Neuburg clearly draws from an intellectualized, cutting, yet humanistic voice… a severely enhanced ability to work with new sounds in new ways."
.
East Bay Express: "Oakland`s own Amy X Neuburg & Men serve up an hour-long aural buffet that could easily be the soundtrack to an as-yet-unmade movie from the next millennium... Describing them as eclectic would be an understatement... UTECHMA will leave you anything but bored."
.
Keyboard Magazine: "Strange enough to leave you wondering, but by no means devoid of hooks. More! More!."
.
Electronic Musician: " Neuburg embraces the infinite possibilities of electronic music but with a knowing nod to the past... The Men are a microcosm of her artistic bent for combining new technology with old roots... A great job of creating an interesting interplay of music, technology, and humor."
.