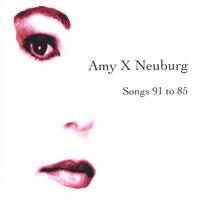 1992. Created mostly while Amy was a college student, as a “pop” reaction to her classical training, Songs has a charmingly lo-tech quality — the result of cheap equipment and unofficial all-nighters in the basement studio. Regardless, you can hear the odd textures and intimate multi-layered vocals that have become part of Amy’s signature sound.

“Neuburg’s talents as songwriter, singer, arranger, studio technician, and keyboardist distinguish this remarkable release. From “This is the last,” an intricate a capella exercise in polyrhythms and accessible pop tunesmithery, Neuburg stretches to a sequence-driven recitatif, “Nothing,” with staccato vocals skipping over a spiky synth pattern. No slouch on keys, she plays some lines on “Get you out” with a most peculiar lead texture — analog synth with snarling animal sample? (Cut in 1985, this track forecasts the techno phenomenon with a frenzied clairvoyance.) A hypnotic quality permeates her arrangements — not the stupor of new age but the more dynamic stasis of minimalist repetitions powered, as on “Keep us 2,” by displaced accents and emphasized by sharp, low-budget, buzzy textures. Even on the sparer pieces, such as “It never ends,” a restlessness underlies her languorous vocals and lazy, legato synth lines. If the world was fair, Songs would win this Bay Area performance artist acclaim as America`s answer to Kate Bush. No, even that isn’t fair: Neuburg is a major player in her own right, a unique voice in the true sense of the word.” [Robert L. Doerschuk]

“Amy X Neuburg is, in my opinion, the best singer in the whole world… difficult, ambitious melodies… she communicates them with an actress’s aplomb and a comedian’s timing.”