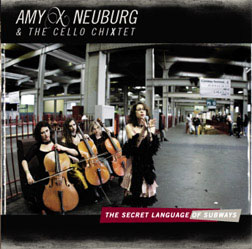 The Secret Language of Subways — for voice, cello trio (The Cello ChiXtet), electronic percussion and live looping/processing — is a song cycle about the inane and perpetually unfinished businesses of love and war and New York.

Conceived largely while riding on New York subways, The Secret Language of Subways uses urban imagery and metaphors of war to explore the deceits, battles and triumphs within personal relationships. In performing The Secret Language… Amy uses drum pads, faders and pedals to process both her voice and the cellos with effects and real-time looping, building up layered harmonies and counterpoints live on stage.

Amy says: “The idea of a song cycle for voice and cello trio began in 2003 when I fell in love with the expressive voice-like quality, enormous pitch range and dramatic look of the cello. I then conceived of most of these songs while sitting on the subway during a three-year period when I lived bi-coastally in New York and Oakland. I was inspired by the rhythmic lull of the train, the fragmented meanderings of my thoughts, the dramas of recent world and personal events, and the deluge of sensory input that is New York itself.”

Released 2009 on MinMax Music and distributed by Starkland.

“Don’t miss the spectacular Amy X Neuburg. She’s the best thing to come out of Oakland since Jack London.”

— composer John Adams, in his blog
.
Subways in the press
.
San Francisco Chronicle: "Neuburg's new song cycle teeters beguilingly on the boundary between pop and avant-garde performance art, and to hear it complete and in sequence is to marvel at the grace and elegance with which Neuburg walks that tightrope."
.
Strings Magazine: "Theatrical, outrageous, and contagious -- scoot over Bang on a Can."
.
Stereophile: Listed in 'Records to Die For' -- "If there is a talent to watch in the modern classical world, it is Amy X Neuburg... a truly original composer... buy it and put some amazement back in your life."
.
Audiophile Audition: "Like Laurie Anderson joining up with Philip Glass or Annie Sofie Von Otter collaborating with Steve Reich... The thirteen tracks teeter and admirably balance between avantgarde, performance art, pop sensibilities and contemporary classical."
.
The Big City: "The music works its way through styles, not only from song to song but within songs... It¹s one for listening all the way through, and that is a truly moving experience... dazzling, exquisite and powerful."
.
Delire Musical: "In a nutshell: Amy X Neuburg¹s best record to date and the best Genesis cover [Back in NYC] ever recorded!... It brought tears to my eyes."